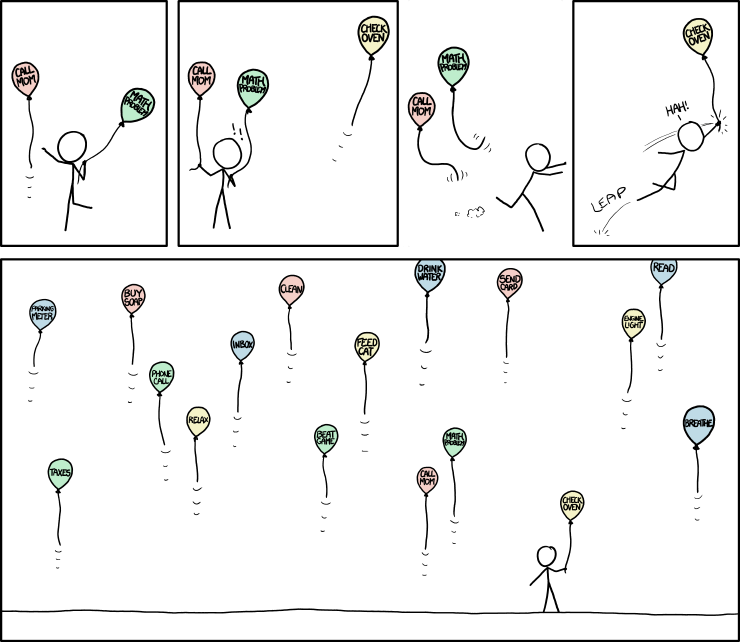 Many people might say that multi-tasking is the one thing they do well. In this hyper-connected world, we could think that this is the only way forward. My personal experience and the many readings I have done recently indicate the contrary. If you want to cut your work time by 50%, change to single-tasking.

At the end of this post, I am summarising the actions you could do to implement single-tasking at work. If you are already convinced, you can jump directly there.

I have recently read two books that are very interesting on the topic: Deep Work from Cal Newport and BrainChains from Theo Compernolle. These two books confirmed a feeling I had after many of these days filled with busyness but no real tangible output: multi-tasking isn’t working.

My journey started when I tracked how much time I could spend per week on deep work. I used a burn down chart, well known in the Agile/Scrum community (you can use a copy of mine), and noticed that I barely reached the 10 hours mark in a week… All the rest was partly filled with lessons but mostly meetings, e-mails, and a general sense of being overwhelmed. When discussing this shocking discovery with colleagues, I noticed that I wasn’t alone.

Tracking my time in this very simple way made me realise that I was wasting such a large amount of time because of trying to chase so many things at the same time, the many interruptions in a day and the lack of planning.

In practice, there isn’t such a thing as multi-tasking with your reflective brain, argues Prof. Compernolle. Where you reflex brain handles hundreds of things in parallel, the reflective one needs so much resources that you will continuously switch from one task (in the general meaning) to the other.

Think of the last time you learnt some movement for your sport. While focusing on one new aspect, you couldn’t focus on the rest. This is until it becomes more or less a reflex and is taken over by another part of your brain.

Another example is with this well known image of the young and old ladies, also used in BrainChains to illustrate this point. Even if we focus, we cannot consciously see both images and the brain actually switch continuously between both.

Why multi-tasking is destroying your efficiency?

You might think that even if multi-tasking doesn’t really exist, you might still apply a quasi-multi-tasking at work. What is the main problem for your work efficiency? There are actually two issues: memory and energy.

To illustrate the issue related to memory, cast your mind back to the last time you were in a conversation with someone and you overheard an interesting discussion at the table next to you. If you multi-task and try listening to both conversations, you might end up in an awkward position if the person your were talking to ask you something. Your conscious brain could not store information from this conversation while listening to the other one.

A very similar situation happens when you are in the office of your supervisor. You are in the middle of explaining an issue to him and you see that he is checking emails (or something else) on his computer. What is his reaction when you ask him what he thinks about your problem? In most cases, you might end up repeating what you just said. I’m giving this example as I am occasionally this supervisor but I try to lose this bad habit.

The issue of energy is even worse and can be summarized by the concept of switching cost. In fact, this is very similar to what happens in a computer with context-switching. You need to unload the current task and load the other one. Unlike a computer, you also need to build up concentration. This results in a huge waste of energy and time when multi-tasking.

The biggest problem for me is checking e-mails like a drug addict. I guess many of you will recognise the following situation: I am working on something that requires concentration and I am just checking e-mails for a quick break. In the best case scenario, I have received no e-mails and I switch back to the main task. In practice, this little interruption costs you already 2 minutes to get back to the level of concentration you had. If, however, you have received an e-mail, then the big problems begin and generally result in a not fulfilling day. Your main concentration switch to the e-mail you need to tackle and this costs you a lot.

Many authors indicate that a break is very important for the archiving part of the brain. However, it should be a real break and not a task switch. Even if you need to plan a task, take some slack, idle time is also very important for your archiving brain according to Prof. Compernolle.

Not convinced yet? Try this small test.

In the book BrainChains, I tried a very simple test to check how much more time is requested by multi-tasking compared to single-tasking.

Try the following example: write the following word and line of numbers in two different ways and record your time for each method.

Even if you actually trained a bit by doing the same task two times, you will still notice that doing it the “multi-tasking” way will lead to a significantly larger amount of time (at least 50%).

Tools and actions you can implement right now.

The main conclusion is simple: to performed more efficiently, stop multi-tasking, i.e. reduce the number of switches. Here are some actions and tools to help you.

E-mails, phone… many of these tools now allow you to set alerts only for specific people (your mum still get priority). But in any case, the first thing I did is to remove the “ping” and little text appearing every time I get an e-mail.

On top of that to make sure I am not tempted (drug addict like), I also block the e-mail distraction through a website blocker. This is very useful in period where I am waiting for the results of a review or a project. On my Mac, I used SelfControl to block specific servers in a non reversible way for a preset period of time. Just add your mail servers, facebook, … and you are good to go.

I have recently found another very interesting software that works on all your devices: freedom. I have tested it and I have been so impressed that I am giving a free one-year license for those registering here.

Use do not disturb signs

Many interruptions result from interesting discussions with colleagues. Although these discussions might be very productive, you should again see this as multi-tasking. It would be often more productive to defer the discussion to later. To make sure you can concentrate, indicate clearly that you’re focusing on a task and would like not to be disturbed. To be efficient, also indicate clearly when you reckon you will be available.

As mentioned above with my example of listening to a conversation while checking e-mail, this is generally not optimal. Instead, commit yourself to be 100% in the task at hand. This will result in two positive outcomes:

When tracking my time, I actually got two birds with one stone because I also approached my week (sprint) in a far better way: planning the tasks I needed to do. To make sure you’re not starting a frenzy day between the various tasks you committed to, use a burn down chart to track your time and roughly plan your week ahead, keeping some slack as buffer and for the unpredictable.

Instead of having my e-mail client up and ready on my second screen, I have my calendar open and could see instantly where I am in my plan. I am therefore blocking time in my week where I want to focus on something where my concentration is needed. I will generally work from home or at least remove the time slot from my meeting scheduling system.

Of you course, being a very big fan of GTD, I could definitely see the links with this technique. Instead of having todo lists, you have active lists sorted by context and organised in a very efficient way. These lists can be combined with a very effective planning of the week.